The Odra River is 854 km long and it is 13th longest among European rivers. With its location in the middle of Europe it is an important waterway which, through a system of canals, connects river basins in Western and Eastern Europe.

The source of the Odra River is in the Odra riverské vrchy (Eastern Sudetes Mountains) at an altitude of 633 m above sea level near the village of Kozlov in the Czech Republic. The river flows from the Sudetes through the Moravian Gate into the lowland. Here it crosses the Silesian Lowlands, the Wielkopolska Lowland and then the Lubuskie Region and Western Pomerania. Before flowing into the Baltic Sea through Szczecin Lagoon it divides into two branches.

The biggest cities on the Odra River are Ostrava in the Czech Republic, Opole, Wrocław and Szczecin in Poland and Frankfurt an der Oder in Germany.

Along the channel of the Odra River there extend areas preserved in an almost natural state. The river is rich in oxbow lakes, wet meadows and riparian forests which make it unique compared to other large rivers of Europe. These precious natural areas, with a fantastic landscape, provide refuge for many rare and protected plants and animals such as the eagle, beaver, heron. The waters of the Odra River abound in various fish species.

However, as a result of historical changes, mainly because of the development of forestry and agriculture, some irreversible changes have occurred in the environment of the Odra river. Forests were transformed into farmland, meadows and pastures. Along the river human settlements were built which later became vibrant cities. A restoration of the natural environment is not possible, and the rich natural areas are thinly scattered, even isolated from each other. Here the Odra River valley is of some help. Along its main course and its tributaries plants and animals propagate freely. In addition, the Odra River connects over a system of canals with the rivers Spree, Havel and the Vistula River. Such a system of interconnected rivers creates an important ecological corridor for Europe, which today provides the possibility of survival of many species of plants and animals.

The most valuable natural areas are subject to different forms of protection, such as national parks, landscape parks, nature reserves or Natura 2000 areas. In ​​the Odra River basin there are seven national parks whose purpose is to protect vast areas with high natural and landscape value, to restore degraded habitats, as well as carry out scientific and educational work.

The quality of water in the Odra River is continuously improving. At first glance, it may seem to be cloudy but that is its nature. The good water quality is confirmed by the presence in the water of characteristic plant and animal organisms, the so-called bioindicators. A traditional sign of clean water is the return of crayfish. Today we can safely swim in designated areas where we are not exposed to any poisons. Water quality is constantly checked and monitored by specialized environmental protection services which have state-of-the-art laboratory equipment.

The state of the Odra River greatly deteriorated in the seventies when the demand for water increased significantly and the discharge of sewage into the river was not controlled. Constantly growing industry polluted the river with heavy metals, such as nickel, chromium and lead. On the river floated a layer of foam which was produced by detergents contained in the wastewater. As a result, the Odra River lost its self-cleaning ability.

In the nineties the law was tightened and the removal of chemicals from the river started. Many newly implemented investment projects aimed at protecting the environment. Today, investment in sewage and wastewater treatment plants is common, and environmental education of children starts already in kindergartens. We know perfectly well that water resources must be used wisely. Industrial wastewater is pretreated on factory premises, and the discharge of untreated sewage into the river is punished with heavy fines.

Our care for the quality of water is supported by the Water Framework Directive which aims to achieve a “good status of water”. To achieve this we have to equally take care of rivers, lakes, groundwater and seas.

Floods have always affected areas located in river valleys. Flooding is a natural phenomenon and its complete elimination is not possible. You can only reduce the risk of flooding and its negative effects.

Floodplains are covered with lush vegetation where birds hatch and many species of insects and amphibians live. For these ecosystems flooding is not harmful, it is often necessary for their existence.

Although the Odra River is one of the rivers where water is scarce, it overflows on a regular basis. The water level in the Odra River depends on the amount of water contributed by its mountain tributaries. Higher water levels occur twice a year: in spring and in summer. Spring floods are caused by the rapid melting of snow and summer floods – by intense rain. In winter, the ice cover forming on the river prevents the free flow of water, thus causing an ice jam flood.

The most severe inundation on the Odra River was recorded in July 1997. It was called “the millennium flood”. The flooding struck the densely populated and developed areas, including large cities – Racibórz, Opole and Wroclaw. The cause of this natural disaster was a simultaneous occurrence of flood peaks on the Odra River and its left tributaries. 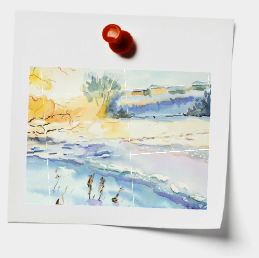